For this week’s edition of Mailing Niagara, I’ve decided to dive into (pun intended) the legend of the Niagara Hilton. 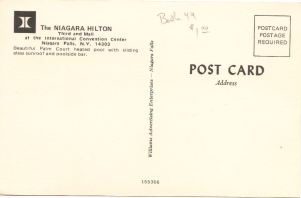 This week’s post is a word-of-mouth story, so of course, take it with a grain of salt.

I once had a teacher that used to work at a hotel in Buffalo. To prove a point, she onetime referred to the Niagara Hilton as “an actual dump.”

That frustrated me to no end.

Now, during her time, that might have actually been true. Unfortunately, she overgeneralized the problem, stating that Hilton was just letting anybody call themselves a Hilton during that time.

When the Hilton opened, it was anything but a dump.

The problematic history of the Niagara Hilton hinges, at least as far as the word-of-mouth goes, on one thing: casino gaming.

When the Niagara Hilton was built, the owners were banking heavily on legalizing gaming. The decor looked like a casino. The amenities matched a casino. There were sprawling open spaces that were just waiting for slot machines.

To back up this point, there’s allegedly a law that states that any hotel that wanted to be a casino had to have 400 rooms. How many rooms did the Niagara Hilton have? 401.

Of course, New York State didn’t legalize gambling. Niagara Falls, NY wouldn’t get a casino until the Senecas were helped by the state via a sovereign land loophole.

Alas, the legend of the Niagara Hilton is a tragic one, although it does have a happy ending: the Sheraton that is currently in its place is doing quite well. It has a Rainforest Cafe, a TGI Fridays, and even a Stingray touch tank.