To finish up our postcard series, I thought I’d throw a curveball: a postcard on the Grand Island bridges.

Another teacher story: one of my teachers (different from the Hilton one) once said that there were no bridges connecting Grand Island to the mainland until the 1960s.

I mean, he’s wrong, but the second set of bridges was completed in 1965, so…partial credit?

The original set of Grand Island bridges (the Northbound North and the Southbound South) were actually made in 1935. These are the bridges seen on this postcard. 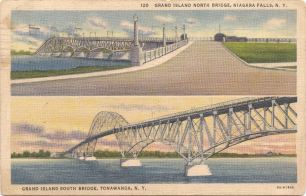 This particular postcard was mailed! It’s postmarked 1937, and was sent to some Mrs. Cook in Ohio.

I just appreciate the fact that someone stopping by Niagara Falls would send a postcard of the Grand Island bridges. It’s so industrially specific.

Hopefully seeing this postcard makes your commute a little better, since we know about the traffic on those bridges.

Next month, we’re going to have a new series…stay tuned!