I’m too young to remember AquaFalls.

I didn’t realize it was a thing until I ran across a mention of it in a Buffalo Spree article. Then I felt the need to start digging…no pun intended.

For those of you like me (too young) or those of you who didn’t live in the area, AquaFalls was a giant hole in the ground in front of the “Flash Cube” One Niagara building. 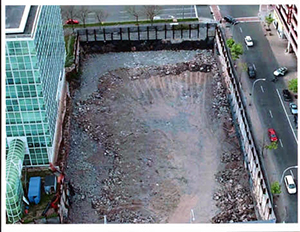 The only photo is obviously from the Niagara Falls Reporter

So, let me try to explain why we blew a giant hole into the ground, then left it empty for 7 years.

So they dug a hole, ran out of money…and then nothing really happened after that.

To be clear: a lot of people we skeptical of this project from the beginning. There was a lot of criticism over the project for a long time.

Of course, the project collapsed, and the city was left with a giant hole. In 2006, Frank Parlato Jr. bought the land, as well as the Flash Cube, and filled the hole.

The Niagara Falls Reporter has often talked about how great a move this was. Parlato evenutally bought the Reporter, so take that as you will.

Now, would this project have been cool? Yeah…but it would have destroyed the Aquarium of Niagara, and we can’t have that. The Aquarium is awesome. In fact, they’re creating a new penguin exhibit for their Humboldts, so that’s going to be awesome!