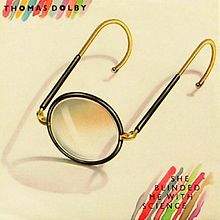 Thomas Dolby’s 1982 hit “She Blinded Me With Science” is another one of those quirky 80s songs that walks the fine line between being a serious piece and being a joke.

Nobody knows anything about this song outside of the old man screaming “She blinded me, with SCIENCE!” Why even dig deeper into the lyrics? It’s a song about being blinded with science. It’s literally about science, and chemistry, if you catch my drift.

Musically, it’s all synth. The quirky tune is perfect for a song where half the lyrics are old men saying “science” and the other half are weird Michael Jackson hiccups.

This is such a weird song. It’s so weird that it’s good.

One thought on ““She Blinded Me With Science” Thomas Dolby Review”