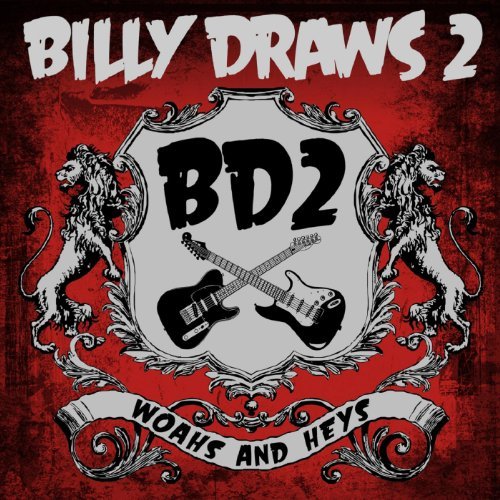 I’m not talking just any album: I’m talking “Woahs and Heys” from BILLY DRAWS TWO, who are totally awesome and dropped this in my lap (gotta love Niagara Falls).

They even sent me a bit about the band:

BILLY DRAWS TWO is an ambush of catchy riffs and vocal harmonies. The call-and-response gang vocals, guitar hooks, and smart lyrics make for a great new sound. The unique three part harmony sets a higher standard for all within the Indie, Alternative Rock genre.

This quartet is led by charismatic, multi-instrumentalist Billy Horn. His colorful and snarky personality provides the core of the band’s songwriting style, and his professional attitude has elevated them to achieve many accomplishments.

Joined on stage by Doug Life, Rosie Lorenti and Mike Miller; the four musicians bring Indie music to a whole new level creating a chemistry on stage that catches the audience and takes them for a hell of a ride.

They have toured the east coast, played events such as SXSW and have performed all over the U.S. from Austin,TX to NYC. They have opened for national acts including Hinder and 80’s icon Queensryche, and have developed a loyal fan base in the Niagara Region.

Having appeared on two compilations for GoGirls music, they’ve also been used as scoring for independent film projects and web series. Most recently Billy Draws Two provided the rock musical backbone of the Buffalo NY debut of the musical Hedwig and the Angry Inch, as well as productions of Bloody Bloody Andrew Jackson and American Idiot.

Okay, now pick your jaw off the floor so we can start this review.

And don’t think I’m gonna be easy on them because they sent me the album, live in Niagara Falls, and are really nice people. I don’t play that payola nonsense.

I feel it important to mention that this style of music isn’t my regular style, so I’m going to try to be as objective as physically possible.

Okay, I used to play a lot of Smackdown vs. Raw 2009, and I’m having flashbacks. The guitar is aggressive, the melodic style is definitely that post-scene late noughties headbang Alternative.

Particular fav: the weird ethereal singing at the beginning.

The pacing of this song is also spot on. It knows when it needs to slow down, and it knows when to hit the gas. The vocals are a bit weak on this track, but that can be overlooked for the most part.

The Rise of Fall:

I’m gonna keep calling this video game music: I’m not being offensive, it’s just where I used to hear this style.

This song continues the fantastic guitar. The style moves back towards the 2007 scene era, which improves the balance. The singing improves on this track, as well. The chorus is also quite catchy, which just makes it.

Trix Are For Kids, Trixie Is For Men:

We slow down a bit on this song, which makes perfect sense since this song is lyrically depressing.

I’m used to bands tip-toeing about self-harm/suicidal, but crap this song just smacks you in the face with it.

I don’t want to say this song moves into Emo territory, but it gets close. It has that overall vibe, which is not a bad thing in the slightest.

There’s this stop-instrument vocal harmony at the 3.5 minute mark that I think broke me. You know what I’m giving this.

I’m taking an aside to mention the fact that the guitar is always on point. That’s a fact.

This song falls back into the Scene-Era tonality, and works for what it is. It’s definitely a middle-album track, but true Alt fans would probably enjoy it.

We musically change gears…okay technically it’s more of a slight pivot, but it changes the sound so I’m mentioning it. This track is slow, which is causing sustainability problems. This is a slip track, which is absolutely justified by the fact that it’s in the middle of the album. Once again: I’m not a super fan of Alt, so I’m going to be a bit more critical.

Tell Your Pants To Shut Up

Side note: I love these song titles. They’re fantastic.

We’re back on the upswing with this track, pulling out of the lull. This is a fun rebellion “believe in yourself” kind of song. It’s nice. It works.

This is a classic relationship Alt song. The uptick continues. The “she said no” chant is the high point in this song. It’s perfect.

The most aggressive thing ever having any relation to Julie Andrews that’s ever existed. It works.

I bobbed my head to this song, so that’s a plus.

Okay, I was actually spastically shaking to it: same thing.

The chorus has just a hint of 80s stadium rock. Just a hint. I’ll take that hint. The rest of the song is standard Alt, and matches the rest of the album.

Anthem For A Thousand Dying Robots

A slow down end track. Unlike the instability in “There Are 4 Lights”, this song is able to keep itself together. It’s balanced, before beginning to disintegrate at the halfway point. That burn in the middle is intentional, and adds character to the song. This is certainly ending the album on a high note.

“Woahs And Heys” by BILLY DRAWS TWO is a fairly well rounded late-noughts sounding album. While it has a few lulls in the middle, the album is able to carry itself well enough that even a Peppy-Poppy Sheep like me can appreciate it.

I haven’t been in a relationship in a quite a while, but this album reminds me of what I usually end of listening to after a breakup. It’s got a bite, and just enough of a cocktail bitterness.

I would really really really like to thank BILLY DRAWS TWO, Billy Horn and Rosie Lorenti for giving me the opportunity to review this album.