Hey flock! If you love odd Niagara Falls postcards, then Monday’s your new favorite day of the week. Every Monday this month, we’re sharing a unique postcard from Niagara’s past, along with some of the history behind the image.

To kick us off, let’s travel back to the heyday of Niagara Falls. Ask any local, and they’ll tell you about their memories of Falls Street. The Cataract. The Strand. Neisners. Diagonal Parking. True to its name, Falls Street ran straight toward the Niagara Reservation itself, becoming a second Main Street for the Cataract City. 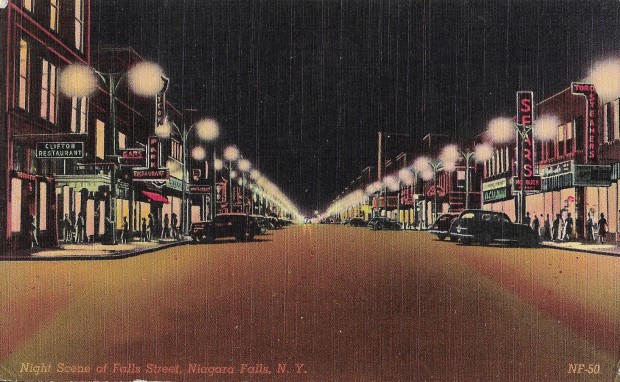 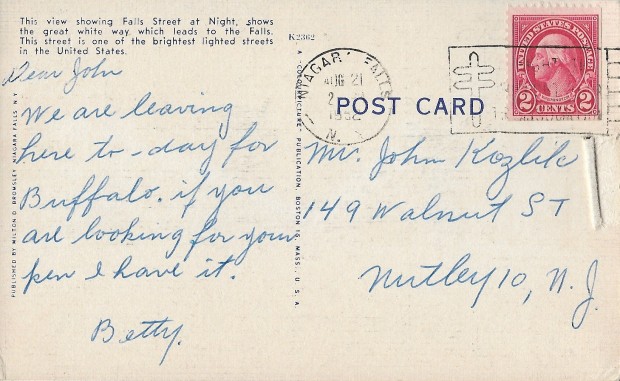 Postcard Caption: “This view showing Falls Street at Night, shows the great white way which leads to the Falls. This street is one of the brightest lighted streets in the United States.

Postmarked August 21, 1952, this postcard shows Falls Street at its zenith. “The great white way” of glistening lights directing people to the Falls was an attraction in and of itself, and had plenty for both tourists and residents to do.

Of course, Falls Street would not last much longer. The end of the decade saw the collapse of the Schoellkopf Power Plant, the construction of the Robert Moses Parkway, and the rapid deterioration of Falls Street. The New York Times put it bluntly in 1963:

Much of the downtown area of the city looks old and tired. Few store fronts have been improved, although some of the honkeytonk bars and souvenir shops near the Falls have been torn down.

By the end of the 1960s, Falls Street would be obliterated in favor of the Rainbow Centre project. The era of Urban Renewal had begun, and its crowning jewel is the feature of next week’s postcard…