Have you seen the city of Niagara Falls, NY’s flag, flock? It’s unlikely: there aren’t a lot of places where it flies, all of which are on Main Street. One hangs at the entrance of City Hall, another one hangs over a community center, an old one hangs inside of the Book Corner, and a modified one hangs at the new train station.

For those of you unaware, this is the city flag:

This is the only online image of the flag, and if you think this is a mock-up crudely made in Microsoft Paint, you’d be very wrong. The actually city flag looks like this at every location, save for the train station switching the crayon drawing for a real image of the Falls.

So, why am I bringing up the city flag?

The other day, I watching this amazing TED talk about how municipal flags are, for the most part, horribly designed:

For those of you not interested in watching a TED talk on flags, I’ll boil it down. Flag design is supposed to be so simple, it can be instantly recognized on something roughly the size of a postage stamp (since that’s the relative size of a flag in the distance on a flagpole). This means no seals, simplistic design, and no words.

The Niagara Falls flag looks like every municipal flag described in the video, and it hurts.

By comparison, take a look at Buffalo’s flag: 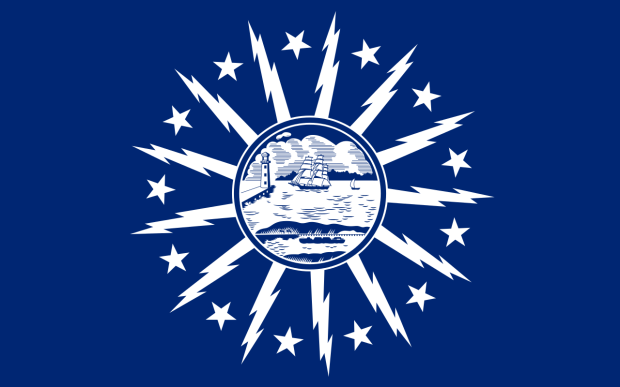 With the exception of the seal in the center, Buffalo’s flag fits most good flag design elements. It’s simple, easy to recognize, and fits the city.

Why is flag design important? Well, as mentioned in the TED talk, it’s all about city unity. When a flag is designed so well that the entire city uses it as symbol, you can see residents’ pride. This is why you can find the Buffalo flag hanging in BFLO gift shops, while it is basically impossible to find a Niagara Falls flag.

So, what can we do about it? Well, like many other cities around the nation, we could push to update our city flag. With the LiveNF community continuing to grow, now is the perfect time to create a design that will embolden our citizens. We could open design up to the residents, collect the best ones, and have them voted on (think of PB 360 and the recent push for hands-on government).

If we decided not to go that route, there are still better ways to use our flag. The city could sell flags to residents, or make March 17 (our founding date) a “city flag day.”

There’s so much potential behind something as simple as a flag. With Niagara continuing to move forward, it’s time that we lived up to that potential.