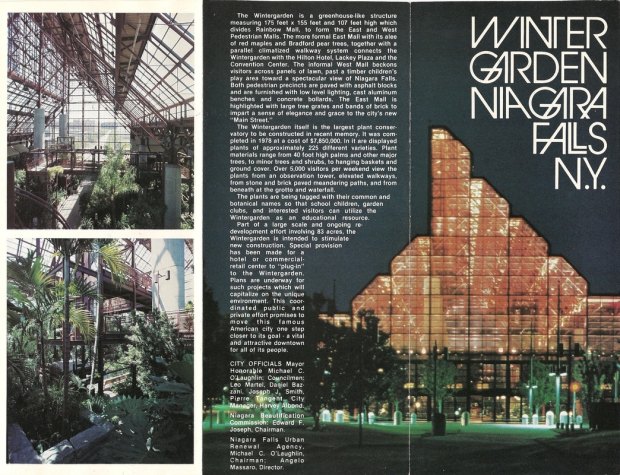 Urban Renewal never worked as promised. There’s no dispute that the destruction of downtown 40 some-odd years ago was probably a bad move.

That being said, there were some highlights. Top of the list: the Wintergarden.

The Cesar Pelli designed indoor tropical oasis was something that was beloved by most, but crumbled into oblivion.

In fact, the Wintergarden had been on the end of the wrecking ball since the late 1990s. Mayor Galie was pushing to tear it down, but it stubbornly stayed. Smokin’ Joes Family Fun Center overtook it by the mid-2000s, and by 2009 the Wintergarden was definitively set to disappear.

But why did the Wintergarden, a hot-spot for weddings and work breaks, have to go? The answer is simple: it was in the way.

I believe that if the Wintergarden had been built about 50-feet north or south of where it was, it’d still be here.

The problem with the Wintergarden was the Rainbow Mall.

Not the Rainbow Centre: the Rainbow Mall. The patch of land banked on one side by the Convention Center, and barricaded on the other by the Wintergarden. When the push began to connect Old Falls Street back to the state park entrance, the Wintergarden needed to go.

Who puts a building, connected on either side by bigger, longer buildings, in the middle of a road? Niagara Falls Urban Renewal apparently.

If a tourist wanted to get from Old Falls Street to the actual cataracts, they’d have to walk blocks out of their way. It was horrible.

We dropped a gorgeous building, with a distinct shape and character, in the middle of one of the most crucial streets in the downtown district.

The hotel and former mall that were connected to the Wintergarden still stand. The road goes perfectly through, although it is now a bit wider, as if to hint the majestic wall of glass that once stood there.

I still wear the coordinates to the building around my wrist on a metal bracelet. In an era that lacks peace, an oasis like the Wintergarden is sorely missed.

3 thoughts on “The Wintergarden: An unfortunate casualty”