If you missed yesterday’s post about Maid of the Mist, I seriously suggest you read that one first.

To complete my Tourist Trifecta started by an awesome Gray Line tour and Maid of the Mist, I found myself on the Cave of the Winds.

According to my tour guide (shoutout to Tom at Gray Line for once again telling me things I didn’t know). The Cave of the Winds was an actual cave until a collapse in the 1920s. After that, they literally hand-dug an elevator shaft and tunnel to connect a series of wooden decks at the bottom.

Cave of the Winds recently got an upgraded pre-show. The movie discusses the history of the State Park, as well as the history of power production and industry. The entire movie was an intense experience, and I might have cried a little bit (because I cry at the beauty of Niagara: don’t judge me). 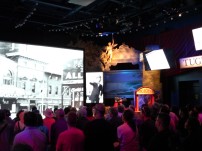 After that, you get your Thompson Water Seal ponchos (who else would sponsor a wooden deck underneath Niagara Falls?), and your special Cave of the Winds sandals (which do come in size hoof for sheep like me). Then, you head over to the elevators, drop 200 feet, go through a tunnel, and hit the deck. 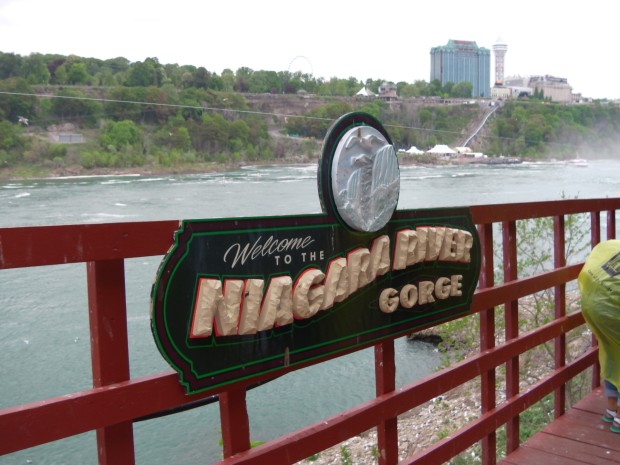 As you walk toward the Falls, you begin to feel the power. Even though the American Falls takes just a tiny portion of the water (the Horseshoe has the lion’s share), it is still intense.

You’re being beaten by thousands of gallons of water coming down at you: you’re poncho desperately trying to keep you dry. If you’re really brave, you go up to the Hurricane Deck.

The closest to the Falls you can get.

At this point, you are about 10 feet from the Bridal Veil Falls. This is the closest you can get any of the waterfalls, and it is awesome. Unlike the Maid of the Mist, you have relative control over how long you’re down there: not that you would want to be down there too long (unless you’re part mermaid.)

I’m so glad that I finally made it to the Cave of the Winds and Maid of the Mist. I’ll definitely be going back on both of them in the future. If you want to really experience the Falls, there really isn’t any better way to do it!

One thought on “Sheepie Takes on Cave of the Winds”

Learn how YOU can have a say in the redevelopment of Niagara Falls (and why there’s sidewalk stickers all over town) on the blog (link in bio).
I’ve waited *far* too long for this.
It’s a beautiful morning in #NiagaraFallsUSA !! ☀️🌈
‪If you’re in Deveaux Woods State Park, stop by the grave of Eliza Keig and wish her a Happy 178th Birthday!‬
If you haven’t tried a Plankie from @pulp716 , TODAY is your day!
The Ultimate Thursday Sundae: