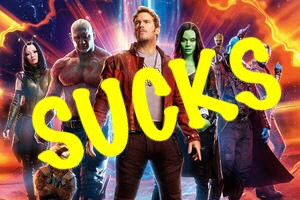 The long-awaited sequel to the pop-culture hit Guardians of the Galaxy came out last Friday, and boy did it disappoint.

The first half of the film was painful, but numbed during the second half.

Many of the characters have collapsed into broad cartoons of themselves. Rocket Raccoon suffers particularly, with an immense amount of cussing, and very little character development.

Star Lord, played by the wonderful Chris Pratt, is somewhat watered down in this film.

There are several plots going on simultaneously, and it can be hard to keep up at times.

Baby Groot is adorable, and does add a bit of charm to the scenes.

The one redeeming performance in the film was Dave Bautista. His off-kilter character remained the only constant in this maddening motion picture.

Now, the film has a few nice moments, even one leading to tears. However, you have to get through an hour of bad plot, too many jokes, and shoehorned cameos to get to a good scene.

I saw this film with a friend. During one scene (which I won’t mention because this is spoiler free,) my friend looked at me, deadpan, and said “this movie is really dumb.”

The review just started writing itself 20 minutes in. The film feels like if Guardians of the Galaxy got a fanservice heavy direct-to-dvd sequel.

After it was over (and I mean after 3 post-credit scenes), I overheard two guys talking about the film. They said it was good, but not as good as the original.

I had a hunch this film would be mediocre, but the Rotten Tomatoes score had my hopes up.

Overall, Guardians of the Galaxy vol. 2 is an over-the-top, obnoxious sequel that doesn’t live up to expectations.