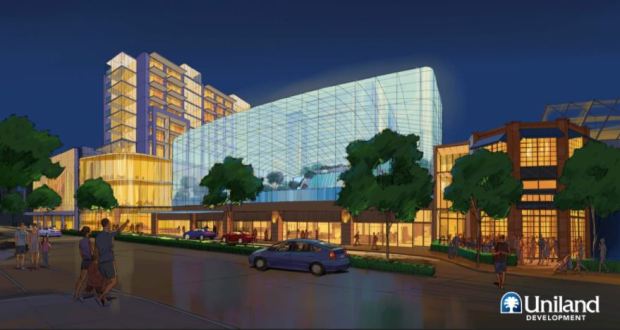 The announcement, according to a letter send to Philip Gambini of the Niagara Gazette, states that Uniland will give a public update this Monday, May 15, 2017 in City Hall.

As stated by Gambini, this comes after a local developer aimed to build a waterpark that sounded eerily similar to Wonder Falls.

The new design for Wonder Falls looks quite a bit different than earlier renderings. The newer rendering has a more modern, Buffaloving vibe to it. The original Rainbow Mall structure has all but disappeared, leaving the question of how much of the structure will be torn down.

With the Niagara Falls Culinary Institute occupying a third of the existing structure, it will be interesting to see how the two projects will form symbiosis.

What do you think of the Wonder Falls project? Leave your comments below!

2 thoughts on “The Empire (State) Strikes Back: Wonder Falls”