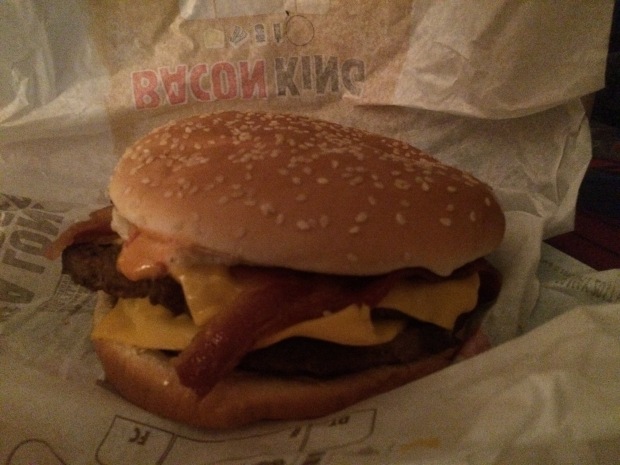 The Farmhouse Bacon King is a version of their King burger. It is two burger patties with cheese, bacon, “king sauce”, onion straws, and a fried egg on a sesame seed bun.

First off, this burger is massive: definitely a two-handed sandwich.

I was skeptical at first, as I really don’t like fried eggs on burgers, but I gave it a shot.

I didn’t even taste the egg.

The complexity of the burger provided a lot of flavors that neutralized the fried breakfast sandwich egg jammed in the top. The King Sauce, really just a form of Thousand Island dressing (similar to what’s on McDonald’s Big Mac), might overwhelm the flavor profile. I know this from the person I was eating with, who didn’t like the sweetness of the sauce. I personally thought it was good.

The onions straws add crunch, but tend to get lost. The bacon also has a strong flavor, providing salt to counter the sweet sauce.

Overall, the Farmhouse Bacon King was an all-around decent burger. If you like complexity in your sandwiches, you might like this. However, if you’re more of a straightforward ketchup-and-pickles kind of foodie, you should probably pass.